The Story of Joe the Trainer…The Saga continues

This is a story about good vs. evil…our hero, Joe the Trainer and the villain’s. (Big Box Gym chain)

And the continuing story of our hero Joe’s triumph traveling down that winding road of uncertainty beating the odds that are so f#cking stacked against him that a sane, mortal man would have quit and gone back to playing by their rules. F#ck them and their rules. Joe stacked failures fast with major market research testing. Follow along now as our hero moves into act 2 moving toward a thriller ending.

As Joe’s story continues, you’ll realize he’s the kind of trainer that really still enjoys training and connecting with people. So much, that he doesn’t totally ever disconnect from his roots and trains 10 hours per week with his clients.

When Joe started to get away more from the evil corporate big box gym, he found out that the outdoor environment provided the same kind of rush…almost like his times in the NAVY, but a little toned down? So he built several different cardio formats, an advanced strength format and outdoor boot camp along with two am/pm indoor semi private classes of 6-8 people each in his “studio.” 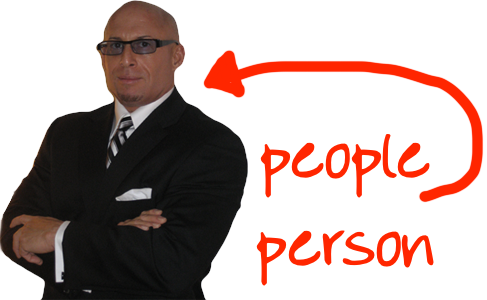 One thing Joe learned was a good idea in his years working in the corporate “Big Box” gyms, was that being more of a people person helped him with developing a connection with his tribe. One good reason for this was to see if there were any challenges they were having with any part of the program that needed to be addressed and that their individual needs were being taking care of…which would help give them (client) a sense that he really genuinely cared about their progress. The second reason was to also find out about any other outside interests they may have and then go record some notes in his “system” about what the client had shared in their conversation with Joe.

Why is this important for Joe? Because in a service oriented business, one important retention tool is to show a client he cares by the types of questions he asks beyond the typical…food, cardio, workout type talks all the time. This has served Joe well for over 2 decades when he recalls a conversation with a client he may have had a month prior, then proceeds to greet the client one workout and says “how’s it going with that challenge with so-and so that you were so concerned about last month?” The delighted client immediately will feel good because Joe listened and remembered something from their previous conversation. This is something that’s like gold in Joe’s business due to the fact that many clients don’t have anyone during their day, maybe in their life that cares enough to ask about what’s happening in their lives.

It really doesn’t take a degree in psychology to understand that in this hustle n’ grind pace that the world is operating in, this blistering pace is what causes a lot of the challenges that brings people in Joe’s front door in the first place. Joe realized to better serve his clients, when he understood that beyond just showing the basic exercise techniques to achieve the desired results with a body part or two…Joe must also strive to engage their minds and souls too…creating a unique experience with him.

Creating a family environment at Joe’s place has served him well. In addition, retention due to this “system” often results in long term client relationships that in some cases for Joe have lasted non-stop for 15-20 years with some clients and their families.

Along with implementing powerful business building behavior on Joe’s part, the use of several technological systems have created many time saving, money earning opportunities. One is with a company called Central Communications. A professional phone answering system that gives Joe’s business a very professional, 24 hour a day, live voice with a scripted series of questions to help Joe with the inbound call system. Joe give a simple script for the operator to ask prospect simple qualifying questions and then they’d obtain name, phone and email plus find out what particular offer they may be interested in. In addition, by having a live operator, Joe’s “hot” lead is then funneled to his email and cell phone in real time for Joe or his admin to follow up with immediately.

From here Joe had a few options. Joe typically would either follow up with a call, text and/or email to ensure the best method of preferred communications is covered for each client, then Joe would send the new lead through the next step in Joe’s sales process…the online assessment and scheduling system. Once this step is completed Joe has an idea of what to do next with placement of the lead in boot camp, rehab, weight management, competition prep or semi-private training.

Next, the face to face meeting is set up to ensure what was described in the online assessment matches up with who walks in the door. Typically what’s written down in the assessment is either over, under stated or just way off base due to something that a prospect “forgot” to mention. Obviously as much detail is helpful while moving the prospect to client so the best fit for both Joe and the prospect is created, in addition to saving Joe time meeting unqualified prospects.

Back in the day, when Joe started training in “big box” gyms, it was easy acquiring leads because clients already had a gym membership which pretty much allowed them to watch Joe train others…and they became sold on just seeing Joe work with others and the quality of results they saw others get while under Joe’s care.

Joe made a point of staying in shape year round and didn’t believe in the off season diet most fitness people have as an excuse to be lazy in eating well. Who’s gonna hire a fat trainer? This philosophy served Joe well for over two decades as well and demonstrated to his clients that he believed in what he sold…and so did his female customers. Joe initially started working mainly with men because they just were easier to deal with. But then he soon realized a secret. A secret that was so powerful to his business that he just about flipped his entire business model completely over to service an all-female only clientele. Why? They are so much more conscious of their appearance than men…and will pay for it. With Joe’s NEW girlfriend being his alter ego…these two continue to kill it. Stay tuned to experience the final act.

Closing act two- See how Joe’s figured out what to do with the challenges and starting to move “BIG TIME!”