The Law Of Hype Part 2

In Fitness Marketing Law of Hype we talked about over exaggeration and how some products or services will do great in the beginning only to find themselves in trouble after the hype wears off.

Now on to Fitness Marketing Law of Hype Part 2

Nothing is better than some good old competition. There are two types of people in this world 1) The type that crumbles in competition ie: Lebron James in the 4th quarter 2) The type that rises to the occasion and actually performs better under pressure ie: Michael Jordan. We see this everyday in sports, life and business.

Competition is ESSENTIAL for human improvement and advancement. It gives us fuel to push harder.

After all this is EXACTLY why we fought our way out of the jungle and are on top of the food chain.

We beat Dinosaurs, Lions, Tigers and creatures that are much bigger, stronger and faster thanI

If your business was the only game in town. You don’t have to be that great because you are the ONLY choice.

What if there were one car company say Honda…..

If that was the case then your beloved Honda Accord would cost 100K and would spend most of it’s time in the shop.

I have been in business in the Chino Hills area now for over 12 years.

So when I heard that another boot camp was voted #1…….

It naturally got me a little curious so I had to investigate it since in my 12 years living in the area I have never heard
of such a thing.

The video below shows you my findings.

My dear colleagues this is EXACTLY why the FTC (Federal Trade Commission) is cracking down so hard on the fitness industry.

Again for the millionth time THIS IS THE INFORMATION AGE

TRANSPARENCY IS NOT AN OPTION IT’S A MUST. PEOPLE WILL FIND OUT ABOUT YOU IF YOU’RE MISREPRESENTING YOURSELF.

I encourage all of you to stand against foolish marketing methods, hype, and just sizzle with no steak anywhere in site.

I encourage all of you to STAND for something and not be afraid to stand against anything or anyone that violates your “core values”.

How are you going to create a category when one doesn’t even exist and vote for yourself?

It’s a common joke among bodybuilders when someone keeps talking about how they won their class at a contest ONLY to find out there were no other participants ;) 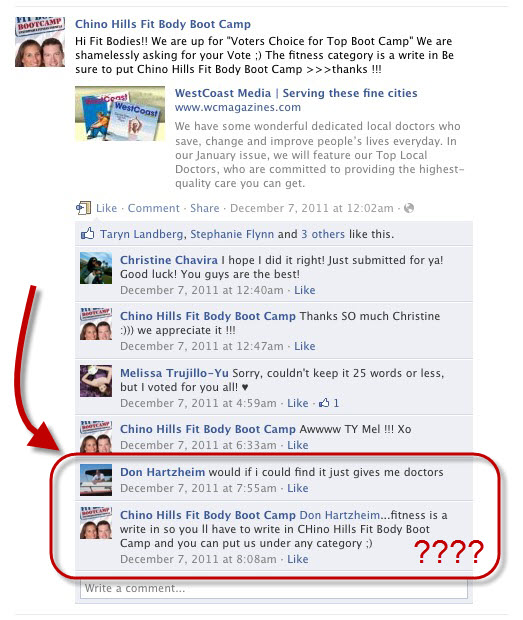 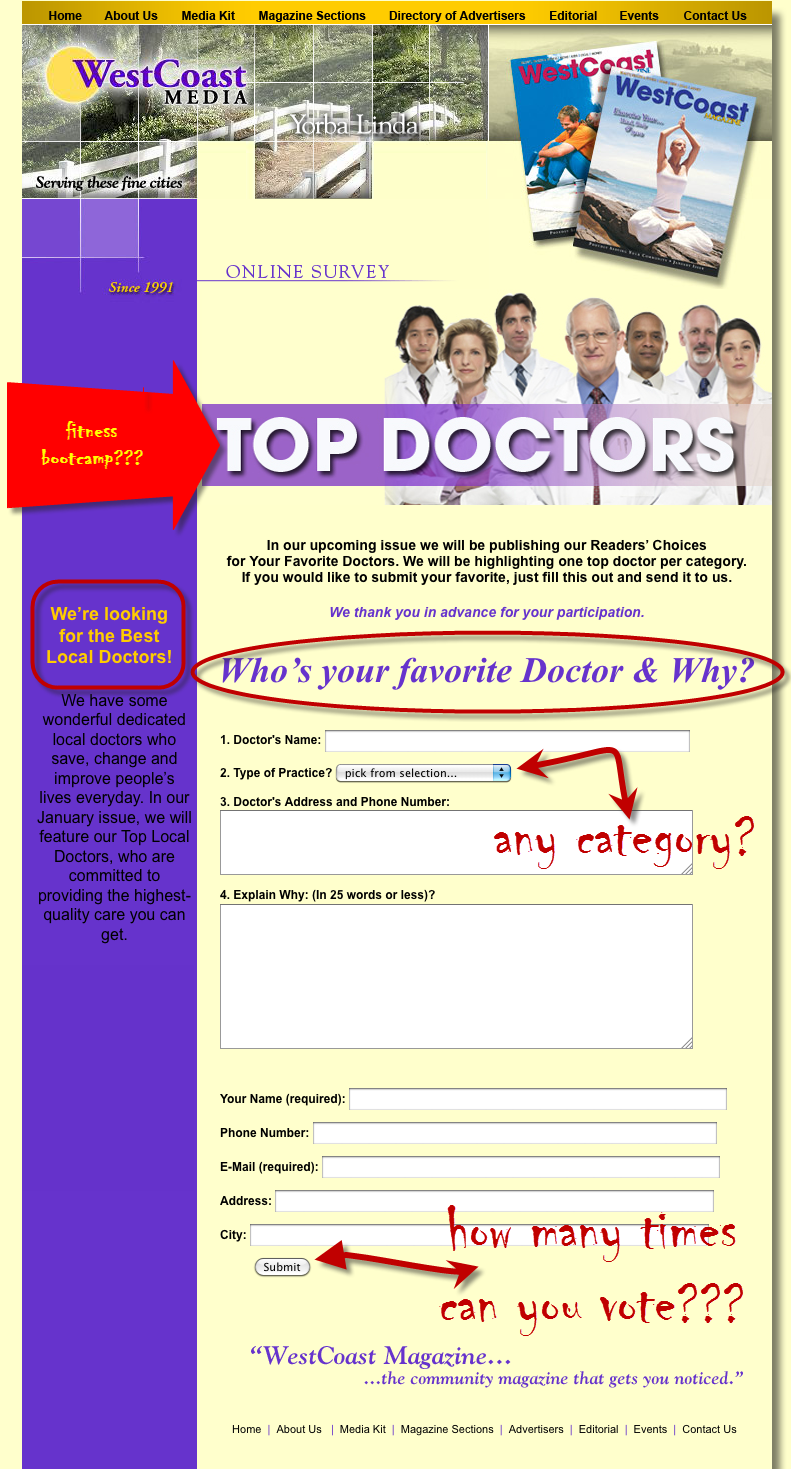 Hey, everybody. What’s happening? Happy 2012 and I wish you nothing but the best year ever in your business. I’m going to do everything that I can to help you achieve that. This is your boy Sam AKA Seven-figure Sam here and I just wanted to talk to you about a few things today.

Now, remember back in May when I acquired Super-Trainer from Kaiser, my boy Kaiser, the reason I acquired Super-Trainer is because I got tired of all the hype in the industry. I got tired of gurus selling people just BS. So that’s why my tagline was, “No BS, No Hype, Take No Prisoner Fitness Business and Lifestyle,” because I’m going to just tell you exactly what’s good and what’s bad, what’s working for me and what’s not working for me. I seriously couldn’t care less if you buy one thing or another from me because I already make a bunch of money elsewhere. This is just a hobby for me. This is just like a public service announcement blog, if you will.

So whenever I see someone hyping stuff up, it’s my duty to kind of research it and making sure what they say is correct. Now today I got an email that said that there was a boot camp in Chino Hills other than mine that was like number one and I thought about it and I’m like, wait a second. Somebody voted another boot camp number one. That’s weird because I have the most clients. I have the best boot camp for the lowest price. We do close to $400,000, $500,000 a year from the boot camp as far as the gross is concerned.

So it’s impossible. So I wanted to check into that and take a look at it. A matter of fact, I saw this blog post that inspired me. Check this out.

So you saw that. This number one fitness boot camp in all of Chino Valley. OK, they were voted. So first, let’s do some investigating to see if that’s true. So first thing I went to is I went to their so-called Facebook fan page. So I went to the Facebook fan page and I went in here and let me look. So I went in there and I looked at it and here on December 7th, there was a post here. “Hi Fit Bodies! We’re up for ‘Voters Choice for Top Fitness Boot Camp’. We’re shamelessly asking for your vote. The fitness category is a write-in. Be sure to put Chino Hills Fit Body Boot Camp.”

So there was no category that you can just write in your category so just make a note of that. So then here, somebody here asked them, “I would if I could find it. It just gives me doctors.” Wow! So it wasn’t even a vote for fitness boot camp. So the reply was, “Fitness is a write-in. So you have to write in Chino Hills Fit Body Boot Camp under any category.”

So let’s click on this to see where it goes. So this is the survey that they filled out. So I click on it and boom, here we go. This is the survey they filled out, online survey. Top doctors. “So in our upcoming issue, we will publish in our Readers’ Choice for your favorite doctors.” OK. So this is a doctor survey so that people went in here and put any category. There’s not even a category, what type of practice. There’s not even a category for fitness. Do you see that?

I can technically go in here and fill this in multiple times. So let’s do that again. Like check this out. Doctor name, Sam Bakhtiar, any category; and I guess I’m supposed to put fitness boot camp. Name, Sam, phone number, email, address and city and submit. So the survey was sent. OK? Let’s see if we can do it again. So let’s go back in here and let’s see if we can do another survey. Sam, anything, fitness boot camp, Sam and I guess they don’t require anything else. Let’s see if it can work again. Let’s see if it will take it. Bam!

Again, this is law of hype. Now here is what is not the law of hype. I’ve had Super-Trainer so far about seven months. So I have Super-Trainer for seven months. Right now if you type in “bootcamp marketing,” bam! I’m number one. I’m number one for bootcamp marketing and I just got in the game less than eight months ago. I’m over PTPower.com and I’m over SteveHochman.com. So that’s not hype. This is real stuff.

So again, if you are going to say you are the number one boot camp or you’re number one in anything, you better go out there and start backing it up.