Fitness Marketing law of hype means a new concept or situation that was successful in the press often times turns out to be a marketing failure. All this fuss is made, the product is viewed as a huge success and then ends up failing (Kind of like the XYZ boot camp franchise). The law of hype primarily refers to new innovative products that claim to make other products obsolete. I never forget the day that one of the  XYZ boot camp co owner said in his mastermind. He said “Open up and XYZ boot camp or worry about it when one opens next to you”.

To date I can name over 40 XYZ boot camp locations that didn’t make it (these are the ones I know of) and many more that will not continue past their contracted agreement.

I recently watched a so called “fitness guru” video that claimed that by raising your energy you will make another 300K in your boot camp.

Do You Believe that This ONE THING ALONE is going to Make You An Extra $300K per year?  I don’t and want your opinion……

Watch closely at about 2:20 in this video for this ridiculous and illegal claim.

While I agree that ENERGY  is essential for running ANY business BUT 300K increase/year?  That’s hype and an illegal claim.

I think these guys really think personal trainers are STUPID. Sir PLEASE I beg you not to INSULT our intelligence and make unsubstantial claims. NOT ONE OF YOUR XYZ BOOT CAMPS MAKE $300K/year.

People love to read stories about breakthrough products and the press love to jump on the innovative bandwagon because people get excited and stories sell. All this, leading to the hype.

Once again, I’m going to mention Coca-Cola’s New Coke. This new category launched in 1985, received so much hype ($1 billion of free publicity) plus hundreds of millions of dollars launching it, and what happened? 60 days after being released Coca-Cola had to revert back to their original classic coke because the new coke bombed. All that hype and the product flopped. Classic coke outsells new coke 15-1. 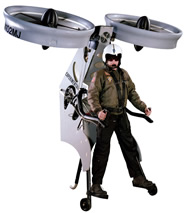 Here’s a funny example. Did any of you learn of all the hype about the personal helicopter in the 1940’s that was supposed to make roads, highways and cars obsolete? This item was so overhyped and really if one were to logically think about it, do you think the average consumer could afford a helicopter. Ok, well Donald Trump got his but he had to give it back to the bank. Besides, think of all the traffic we experience today; could you imagine that in the sky?

When you as a fitness entrepreneur come out with a new concept make sure you have studied the market and the competition and think about the unpredictable. No one can honestly predict the future but you can utilize past revolutions to help you create your new concept. Read the local and well-known newspapers. People think the front page news is where all the action is; that’s where all the hype is. If you really want clues to the future take a look at the innocent stories in the back of the newspaper.

Keep in mind that hype is hype and that most new concepts don’t just appear with loud marching bands on the 5:00 news. Real breakthrough products typically arrive unannounced and sneak up on you. In the fitness business you want to spend your time convincing the prospect that your product or service can change their lives. It’s their perception of your product that sells. You can get the media to hype it up as much as you want, but if it’s not conducive to the prospect’s needs then all the hype in the world won’t do a thing.