Ok so here’s the deal – I’m sitting here in the lobby of the Hilton in Stamford Connecticut, after all of the madness that was THE CONTINUITY SUMMIT –

I’m pecking away on the computer at a few things I wanted to implement tonight – the event ended earlier today, and I decided to stay an extra night at the hotel, to kind of decompress and sort through all of my notes, etc.

Doug is passed out on the couch – we’ve gone through a few straight 16 hour days of learning, net-working, and tom-foolery, and it’s nearly 2AM right now, so he’s got a right to be beat –

The dinners, drinks, and hallway sessions were just as valuable as anything we learned on stage, which is pretty incredible because this event had one of the best line-ups I’ve seen anywhere – I was the only idiot taking notes over Patron shots and dinner at PF Cheng’s – 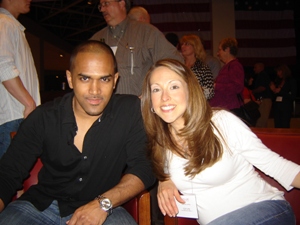 I also made a ton of new friends, both with people I’ve admired from afar but never met (here’s me and one such person, the very pregnant first lady of fitness e-books Isabel De Los Rios), and with people I’ve been in touch with but was meeting for the first time – including a ton of top flight trainers and entrepreneurs that I’ve come in contact with through my blog, like Noel Lyons, Brian Cannone, Greg Anderson, Nii Wilson, Atonio Valladares, and many, many more –

This thing was better than advertised – that was the consensus among everyone I spoke too. Even though several of the speakers had products to sell, what is traditionally known as a “pitch-fest”, that was more than acceptable because of the unbelievable marketing and business content that was delivered up there –

Shit! I got to meet Mark Joyner, a guy who’s had a huge impact on how I think and view the world – a few of the bits he shared during his segment were completely profound and again, shifted some of my ideas, and brought much more clarity to others – again, the guy’s a genius.

I also met Mark Victor Hansen, who’s sold over 175 million books – if you didn’t catch how he punked me, check it out in the videos in the last post. That’s fine though – I’ll take it from a guy like him – his segment was incredible, and just talking to a guy of his caliber changed me.

So thanks again to my buddy Ryan Lee (the continuity king) for bringing me and Doug out here as his guests and taking such good care of us – if you ever get the chance to meet him, you’ll immediately understand the secret to his success – he’s probably the most genuinely nice person I’ve ever met in my life (and he also has gorilla balls made of brass!).

Now I’ve got a few weeks to take action on what I’ve learned here and the connections I made, which is always the most important part – the next event lined up is FAST TRACK fitness marketing event by Pat, Nick, and Jim being held out in New Jersey on the last three days of this month.

Check out the speakers at this one if you haven’t already: www.fasttrackfitnessmillions.com. It’s another all star list, a little more fitness centered but still guaranteed to be crazy. Last I heard from Pat Rigsby, they’ve expanded it to a bigger room at the venue, so there are still some spots left – if I were you I’d snag one.

You’ll be hearing more about that one from me – after what I’ve just been through, I don’t think I’m ever missing another fitness marketing event again!