THE HARD ROAD TO OPENING YOUR OWN TRAINING STUDIO

Stop training guys like this before too much of the sleaziness rubs off.

On that note, I got a guest article from fitness expert and long time reader Noah Dean about the hard road a friend of his took to getting his new training business launched.

It’s about his friend Dane Krager, who recently opened his own studio, Dane’s Body Shop. I thought this would be a great guest article to include for a change of pace.

Usually I bring you a one-sided, overly positive, and often self-serving views of the fitness world.  But this article should give you a good dose of the realities of this business and what a lot of us face.  It’s full of drama and is a good slice of life, which always makes for great reading.

I’m sure you’ll be able to see a little bit of yourself here, as I did.  And hopefully Dane and everyone else will be able to use Super-Trainer.com to make the road a lot easier from here on out.

Through Super-trainer.com, Kaiser Serajuddin has put together a “must-have” when it comes to starting your own gym/studio. Unfortunately, there are those who are unaware of what Kaiser has to offer and go through hardships of starting a business that may have otherwise been avoided. This is the story of such a person. However, if Super-trainer.com had been in the mix, the near ‘Greek Tragedy’ that is the following story may not have been so full of, well, tragedy.

Dane’s Body Shop: A Diamond from the Rough

Every now and then we come across that one person who seems to have the answers to all life’s questions. No, not the sardonic, annoying, always-try-to-one-up-you guy, but the person who really does fit the mold of a confident, yet humble, polite, generous and motivated individual. You know, the man/woman who has been tempered by adversity and is destined to have a movie made about them (or at least a script written). Well this article is about that guy, and how he got that way.

I first met Dane Krager in the year 2000, at Angelo State University, a small school resting in the wilderness that is West Texas. He was an atypical jock to say the least: starting defensive end, sack record-holder, admired, driven, intelligent, and yes, ridiculously good-looking. Dane had been given the opportunity to play at the renowned University of Texas out of high school but chose to attend the small school in hopes of getting more playing time. Soon after graduating with a degree in English Literature, Dane was called to join the exalted National Football League. It seemed to most that he had the world at his fingertips. But, that wasn’t the case. In under a year, Dane had been cut from both the Minnesota Vikings and the Seattle Seahawks; he had not played in one regular season NFL game. This was, in Dane’s eyes, a major personal failure.

After his chances with the NFL had come and gone, Dane moved back to his hometown of Austin, Texas where he lived in a small, one-bedroom apartment with his red lab, Cede. After a short stint interning at a local television station he decided to try out for the Austin Wranglers, a recently organized Arena Football team. During the last day of training camp, Dane asked if he could deep snap for one play, just for fun. When that single snap was a success, Dane learned that it was the only play that kept him from being dismissed from arena football. “I’m glad you showed me that, Dane.” the coach uttered, “We were about to cut you.”

But Dane’s humble beginning in arena football wasn’t an accurate predictor of things to come. After four years, Dane had served as team captain, “player of the week”, and appointed to the AFL All Ironman team… as the starting fullback and linebacker.

In August of 2007, Dane retired from football and began working as a personal trainer. He found a fellow trainer who convinced Dane to let him play a part in the business, and the two started a boot-camp style training partnership. Dane completely poured himself into this endeavor. But after eight months of waking up at 4:30 a.m., investing all the start-up money, and paying his fellow “trainer” to… sleep in, Dane found himself at the losing end of the joint venture.  The business failed miserably; perceived failure number two.

Dane then decided to take the boot camp idea on as his own. With what he would refer to as a “complete lack of structure,” Dane began to train whomever, however, whenever, and for just about any amount of money. But without structure, his personal training appeared nothing more than a hobby, not a business, and a solid pool of clientele couldn’t be established. Dane was missing something, he felt lost. Enter failure three.

Although he hid it well, Dane was reaching his breaking point.

In the midst of this relatively chaotic time, a former coach called and offered Dane position with the Arizona Rattlers (another arena team). With not much to lose, he took the opportunity… sort of. During training camp, Dane stood, looking at all the young, resilient, gridiron “wannabe” heroes. And then something happened: he didn’t want to play anymore. The fire of aggression he had carried with him for so long was gone, blown out by a single epiphany. He was done. And not just with football. Dane was finished with the terrorizing depression he had suppressed since being cut from the NFL. He was done with the bitterness of losing his savings, time, and trust in others for a business that failed, twice. He was done carrying the anxiety of not knowing what the future held. In his own words, he was “just done.”

Immediately, Dane approached his coach and explained that he was quitting the game of football for good. He got in his truck and made the long trip from Phoenix to Austin. Then… he bought a plane ticket to Warsaw, Poland.

Even to me (a very close friend), I can’t understand what exactly was going through his mind during that long trip from Phoenix to Austin. I mean, who decides to randomly take a vacation to Poland? I learned in my interview with Dane however, this was no vacation. Dane explained, “I figured I could either invest what little money I had in stocks and hope for the best. Or, I could travel away from the world I knew, and hope for the best.” Personally, I still don’t get it. Dane didn’t even have an agenda. He was just going to see where his feet took him. It’s a concept that very few people would be willing to take past “I would do it”. Dane was searching for something; he just didn’t know what exactly it was.

In the end, Dane’s random act of self discovery led him on a journey that would span three months and more than a dozen countries. By plane, train, boat, and “thumb”, Dane traveled to Poland, Egypt, Italy, France, Holland, Greece, and the Czech Republic; just to name a few. Sometimes he slept in a hotel, and sometimes he slept on the ground. Some meals were multiple courses, others were stale bread, and others were nothing at all. Some of the people he came across were warm, charming, and honest. Others he approached were warm, charming, and trying to steal all he had. But through his impulsive, 90-day experience, Dane found what he had been looking for; the one thing we’re all looking for.

Atop a mountain outside of Flam, Norway, Dane sat meditating. He began mentally piecing together his idea for another business to be meticulously assembled back in Austin. But this time it was different; this time it was about helping others. While in Egypt, the smiling faces of the local children had inspired Dane to “pursue something other than a bigger bank account.” He stated, “While spending time in Luxor, I learned that’s it’s not what you have, it’s how you perceive what you have. Many of the children owned nothing more than the torn clothes on their backs, but I’ve never seen a group of individuals more happy and content with their lives. I learned that if you have happiness, you have success.”

When Dane returned to the states, he “was ready.” Dane began saving every penny from various odd jobs. He leased a small, crumbling, auto-body shop near downtown Austin.  After several months of exhausting work to repair the facility (with help from his father), Dane’s Body Shop was open for business. Bu what exactly is the “business”?

Dane uses what he calls, a “synergistic/fusion approach in which clients will get Yoga, martial arts, strength conditioning, Pilates, Nutrition guidance, and more.” This slew of various fitness/wellness is vital for building a foundation for holistic wellness and is common among today’s personal trainers. But it’s the “more” that people don’t get from your run-of-the-mill instructor.

At the start of each session, Dane will seem like any other trainer. He’ll introduce himself, and then address the trainees in a tone typical of a man ready to coach you through a hellacious workout. You’ll hear the latest tunes from the local Austin bands in the background and smell the aroma of sweat, yoga mats, and maybe even old care engines. But as the workout continues, you will notice something about Dane that is rare in this field, a genuine sense of caring. You see, Dane has the understanding that everyone is fighting a never-ending battle. And he is honored, no, humbled by the fact that you have trusted him with your time, ambition, money, and wellness. Dane will push you to your physical limits, but keep you focused on your life goals (not just those that show up on a scale). And don’t be surprised if afterwards, he strikes up a deep, what-do-you-want-out-of-life conversation.

Why? The answer is simple. Because Dane’s Body Shop has an owner that sincerely wants you to achieve something extra. His experiences of failure and triumph, as well as his passion for helping others allow that desire to shine through. “Don’t get me wrong” Dane explained, “Anyone who commits to a session is going to shed unwanted pounds, improve their cardiovascular endurance, and/or lower their cholesterol, but I want to inspire them to make the most of their lives, starting with the physical and transcending to the mind.” 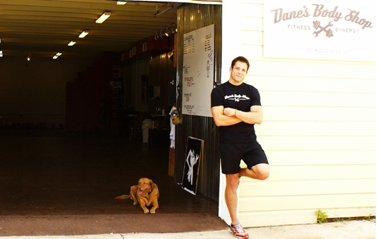 And this is where this story ends; but is only the beginning of a new story.  I wish I could say that Dane’s influence will catch on around the world and that others will emphasize the aspects of wellness, fitness, and holistic tranquility like he does. But the truth is: Dane is THAT guy. Few others will ever have the rare combination of insight, wisdom, and genuine sense of love and caring that Dane Krager has. If you’re within 1,000 miles of Austin, TX, a trip to Dane’s Body Shop will be well worth your time.

So what’s the moral of the story? Well, other than turning to the never-fail cliché “hard work will pay off”, I’ll also recruit the “don’t make things harder than they have to be.”  Super-trainer.com is an invaluable source of business savvy that is literally just a click away.
Noah Dean, PhD, ACSM-PT