The Miracle of Re-Branding

Have you dined on a Patagonian Toothfish lately? Neither have I. Chances are, if you saw this listed on a menu, an unsavory image of a smiling, toothy piranha-like fish would come to mind. Something so unsightly and savage could never possibly taste good, you might think. As the saying goes, “There are plenty of fish in the sea!” Yet, if you were to call the Patagonian Toothfish by its more common market name – the Chilean Sea Bass – then you have a whole other story.

According to Bruce Knecht, author of Hooked, “It really is [a tribute to the genius of marketing, taking an ugly fish called the Patagonia toothfish and giving it a dressed up name like Chilean sea bass], because the guy who discovered this fish back in 1977… found it in Chile where people wouldn’t even eat it. It’s an ugly-looking fish.”

The success of the Chilean Sea Bass was largely due to its name change. “Chilean” not only sounds good because it’s exotic and South American, but also because it sounds like “chilly,” conjuring up images of fresh coldwater mountain streams full of healthy, thriving, untainted fish. Something like “Chernobyl Sea Bass” would just never fly, for example. The idea of sea bass in general is a comforting thought because our dads fished for them, trophy hunters love them. It’s familiar. On the other hand, I don’t want to be eating hideous, largely unknown deep sea monsters like the Long-Nosed Chimaera, the Vampire Squid, or the Deep Sea Dragonfish.

The rebranding of the Chilean Sea Bass helped us to get to know this tasty delight better. We found that indeed this fish produces good-sized fillets of white meat. Its mild flavor and pleasing texture makes it one of the more enjoyable fish to take a bite of. Also, cooks love that it’s easy to cook, given its high fat content, and it’s well-suited to broiling, grilling, sautéing and searing. At one time, this fish sold for $1 a pound, but the price quickly skyrocketed to $10 a pound as demand grew. Thanks to its new name, word spread quickly about the Chilean Sea Bass and it was hunted, poached and pirated to near-extinction in less than 30 years.

People can morph into more marketable names too. Would you elect Barry Obama as President of the United States? Barack dropped his nickname to pursue more professional aspirations than Little Barry could ever hope for. Would you wear a shirt with the “Ralph Lifshitz” logo? Not likely, but perhaps you would wear Ralph Lauren. It’s not that Ralph was at all embarrassed or ashamed of his Jewish heritage, but rather, he was tired of being mercilessly teased and he needed a new moniker. Would you expect “Robert Le Roy Parker and the Sundance Kid” to be a movie about a notorious bank robber? Butch Cassidy just has such a rugged ring to it, don’t you think? Who sounds more like an action hero – Mark Vincent… or Vin Diesel? Where would Motley Crue be without Frank Carlton Serafinl Ferrano (or should we say Nikki Sixx?) and what about Guns N Roses without Saul Hudson (err… Slash)? Who would you rather see wrestle… Randy Poffo or Randy Savage? Name changes are a way of rebranding that is cheap and easy.

Remember ValueJet? Now it’s AirTran Airways. Whatever happened to Philip Morris? Following a litany of litigations against them, the company is now called Altria. Quantum Computer Services sounds like a name of a basement repair guy; America Online (AOL) is such a better name for the company that has become synonymous with connecting Americans to the Internet! Were you aware that Google was initially dubbed “BackRub”…? Companies like “Brad’s Drink” (Pepsi) and “Jerry’s Guide To The World Wide Web” (Yahoo) have dropped their egomania for more marketable names. 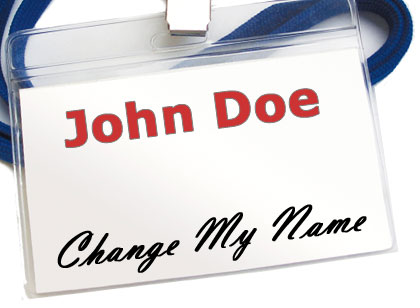