Ma fitness business owners think the fitness marketing battle is between products and that in the long haul the best product will win. They preoccupy their research with finding facts and analyze it enough to ensure they will gain the prospect’s trust. Once they are confident their product is the best they enter into the marketing arena thinking they will win. The problem with this theory is that it’s a form of illusion. In reality there are no best products. What exist in the world of marketing are perceptions in the mind of the prospect and that perception is the reality.

If you think about it, truth is relative to your mind or the mind of another person. When debating over a specific topic, one person is perceived correct and one wrong. It’s not that either one of the individuals is right or wrong. It’s the perception of each individual. And each person believes he is right because they possess a personal truth. They feel their perception is more accurate than the other person’s.

Reality is about perceptions and this is the reality entrepreneurs must work with. This concept seems unfair but it is a fundamental concept of fitness marketing you have to get used to. Many fitness marketing mistakes arrive from the belief that you’re fighting a battle between products. As an entrepreneur you need to realize the use of the word “best” is a subjective term based on one’s perception. People’s perceptions are based on different personal requirements, which in reality form different opinions.

Fitness entrepreneurs who believe they must have the best product in order to corner their market will gather facts and determine in their own mind they have the best product, but they do this by making modifications to their own perceptions. Trying to change a prospect’s mind is a different story. It doesn’t matter how much knowledge a consumer has with a product, the assumption is they are always right. People believe in personal truth and often times feel they are not wrong. Proving your product is better than another is the natural law of fitness marketing and states that you will either win or lose based on the caliber of the product. But let me show you why I believe this to be wrong. 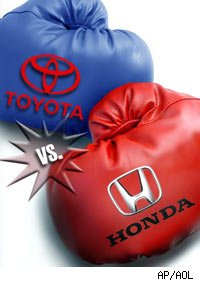 The two biggest selling Japanese imported cars in America are Honda and Toyota. Most consumers believe the fight between these brands is based on reliance, quality, style, horsepower, gas mileage, and price, but it really isn’t. It’s about what people think of the Honda and Toyota that determines the winner. It’s the battle of perception.

Japanese car manufacturers sell the same cars in the U.S. and in Japan. If marketing were a fight of products then the identical sales order should be the same for both countries. But in 2010, Japan sold more Toyotas than the U.S. and the U.S. sold more Hondas. The U.S. sold almost three times as many Hondas. In fact, Honda Accord was the second highest selling car in America but it didn’t even make the top 20 list of highest sales for Japan.

What is the big difference between the Honda Accord in America and the Accord in Japan? The product is the same, right? But the perception of the car is different for the prospects. If you were talking to a buddy here in California and said you purchased a Honda, he would ask which car you bought, the Accord or Civic. Tell the same story to a buddy in Japan and he most likely would ask what motorcycle you bought. Why the difference; because prospects in Japan know Honda as a motorcycle manufacturer. They were the first in their minds in this category so the Japanese don’t want to purchase cars from a motorcycle company, hence why the Accord didn’t make it on the top 20 list of highest selling cars. Again, this shows how marketing is a battle of perception, not products.