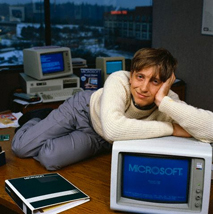 Bill Gates has had so many failed products it’s a running joke. He’s also incidentally the greatest business man who ever lived.

Whatsup gang and welcome to a new year!  I hope yours was good and you’ve got an ambitious and realistic action plan for 2011.

On the subject of taking action, I wanted to put together a short article to get across an important point.  It’s about one of the main things that’s hanging up anyone in the fitness business from taking the next step in their careers, whether it’s getting started, going solo, stepping up their solo practice, opening a studio, or opening their second one or a full scale gym (as my long time student CC Mathews recently texted me he’s in the process of doing now).

Well, one big antidote to procrastination that served me well getting my fit-biz started is not being afraid to suck.

Because no matter what, you will suck when you get started.  That’s how it is, and that’s life.  No one was good at anything the first time they tried.  But that doesn’t mean you get to sit on your ass and not get started – you still need to take massive action in spite of the fact you suck.

Now a self-serving fact I’m going to share with you is getting Programs on the subject (like the kind I have here) cuts down on the period of time you spend learning the ropes.

For example, the trainers that bought my licensing program didn’t suck with their sites, marketing, or business approach, and customers of the new licensing program coming soon will get an even bigger head start.

But I’m sure in every other area besides the ones mentioned above they still went through growing pains.  So despite your best efforts, it can’t be avoided.

You may be afraid.

You must fight through this at all points of your career.  And it comes in waves.  Once you have one-on-one mastered, groups is something new.  Then the mother of all next steps, opening your first place.   Then taking that place to huge profits.  It never ends.

So as you proceed this new year, whatever level you’re at, know that there will be times you’re not sure what you’re doing, that you just have to educate yourself and fight through.  I know I have several high six and seven figure trainers among my readers.  And among the ones I speak to, they always have big, hairy, and audacious things they are up to.  The difference is they have gotten very use to the “pain period” in getting momentum in anything.  They expect it so are not scared by it.

Here’s a case in point.  You of course have heard of FIVE HOUR ENERGY drinks.  They’re practically as big as Red Bull now, on sale at every supermarket and convenience store in America, and probably worldwide.

Do you remember what their first ads looked like?  They were was just a very simple narration over stock video clips you can find on istockphoto.  I’ve had more advanced videos produced here for Super-Trainer.

But even though those videos were so simple, it doesn’t matter – they were the first move with a hot new idea, and got tremendous results.

Now that there are a hundred and one copycat products, they’ve stepped up their game and are still on top.  Here’s a look at one of the more recent spots:

You’ve got love their invention of the term “2:30 feeling”, to put the benefit of the product into language their customers could understand, similar to terms like “skinny jeans” fit-pros should use in their marketing.

Five Hour Energy also has spots with pro athletes all the time now.  That just goes to show that it’s more important to get started than get it right in the beginning, and just build from there.  That same formula can work for you no matter what you’re selling.