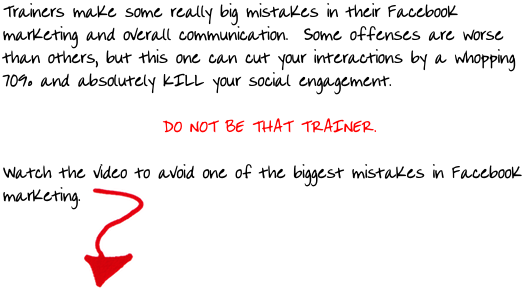 Hey. What’s up, Super Trainers? This is Josh Carter from the Facebook Funnel among other things and I am going to share with you today – well, I’m going to talk to you about a huge mistake I see a lot of trainers make and trainers make a lot of mistakes in their Facebook advertising and marketing but this one is huge and it’s just so easy to avoid. So I’m going to show you just how to avoid it because it seems so tempting. It’s a very tempting thing to do and kind of an easy way out because we’re lazy. Heck, I’m lazy. If this worked, I would use it but as of right now, you get penalized if you do this. So it is a very, very bad [0:00:43] [Indiscernible]. Don’t do this.

All right. What the heck am I talking about? It’s using something like an auto poster to schedule your posts. So something like HootSuite. It can actually decrease your interaction by 70 percent. So if you took that – I should say yes, your engagement. So it decreases it by 70 percent.

So this is a study done by – I don’t know, somebody with a calculator I would imagine and what it showed is for a lot of these auto posting services with HootSuite probably being the most popular, TweetDeck, Sendible, Twitter, some other ones. You could see that the interaction goes down whereas if you post standardly on Facebook, your interaction or engagement stays up. The bottom line there is that Facebook buries it. It doesn’t show it as relevant or just doesn’t like it. They can tell if it’s coming from a third party application or if it’s just coming through on their website.

So let’s take a look at some stats here regarding that. So this is the number of posts per update source. So if you look here, the normal has the highest number of posts per source meaning normal means using the web browser especially on your normal Facebook.com website. Native I believe refers to their native apps meaning applications that they, Facebook, have created like the iPhone app and things like that. App content, that would be things like – within an application. When you’re on Facebook and you’re on somebody’s tab and it says something about, “Hey, can we post something within Facebook?” and you allow it or whatever, things like that and then it might also have to do with liking something and they’re not really being definitive on what each thing means.

But what you need to see here is that the normal thankfully has the highest number of posts but HootSuite is not actually that far behind, man. It’s number four and that is telling me that people don’t understand that their engagement is dropping when they use this type of thing and that’s huge. Huge in a bad way.

You could look and see as the others go down. SocialOomph is way down here. So, Involver, Tweet Deck. Not a lot of people are using those right now and so most likely those posts or status just get buried. Let me back up a little bit and tell you in case it wasn’t clear. Services like HootSuite and others allow you to schedule posts. So you could go in there at one time and you load a bunch of status updates or whatever and you say show this one on Monday. Show this one on Tuesday. Show this one and you just load it up and you essentially pre-schedule your status updates.

While that seemingly is a very cool thing to be able to do, the unfortunate thing is that the engagement is way down which means less people see it. Less people interact with it. Facebook just does not perceive it as relevant content because if it’s coming through the HootSuite or other – I don’t mean to keep [0:04:09] [Indiscernible] on HootSuite. They just seem to be the most popular of the punished things.

Now let me also be clear. I don’t think it’s fair. I think there’s no reason to punish HootSuite users assuming they are not just spamming and maybe that’s part of the issue is that HootSuite people just do 10 status updates or posts a day and so Facebook said, “All right. Screw you guys. I’m going to ping you and push you down on the news feed so that people don’t see your stuff.”

But I think scheduling auto posting is a great idea in theory but in practice and in reality, unfortunately we are penalized for that. So we should not do it. So, to that end, let’s take a look at this. This is the average interaction rate for the most popular sources. So if you look – where is it? HootSuite is way down here. So it gets like a third of the interaction that publishing via the normal mechanism, via a web browser does and all the other types are all down here too.

There are some that are white-listed but they tend to be higher-priced ones that we wouldn’t use anyway. So it’s pretty darn clear. Look, when you post normally, you get a heck of a lot more interaction than when you use one of these Involver or HootSuite or any of those and so what that means is post your own shit. Don’t rely on – at least right now because you get penalized. Go in there and type your own status updates. Do it yourself. I guess technically you could have an assistant. Do it but the bottom line is do it via the website. Do not rely on an automatic automated posting service and to that end and I’ve spoken on this on several occasions. When you make status updates or posts especially on your fan page, you need to make sure that you make them socially engaging.

People want to interact with a person, not with a brand. People don’t identify with brands. They identify with people. So post it as yourself. Questions work great. Always use – not always but frequently use questions in your status updates and posts because that will get people wanting to answer them. Have a call to action meaning – what’s an example? One I used not long ago was, “Hey, I’m having trouble sleeping. What type of tricks do you guys use?” People just flooded me with a bunch of oh, I do this. I do milk. I do magnesium. I do whatever. So questions work great. You can use fill in the blank questions. It’s another great one. Just have blank is my favorite cheat food meal and then what I’m going to add on to that would be have the call to action which is leave a comment below. So blank is my favorite cheat food meal. Leave me a comment below, something like that or like this – if your status update is something else, the call to action might be, “Be sure to click the ‘Like’ on this post so that you get that.”

All of that stuff, the various interactions count because the higher your score essentially, the more relevant Facebook will find your content, the higher it will show up in your prospects, your fans, news feeds. So use questions. Use a call to action. Tell them, “Click the ‘Like’ button or leave me a comment below.” Also there’s the new “Share” button. Tell them, “Click the ‘Share’ button to share this post with your friends.” Tell them. People are like sheep. You got to tell them what to do. If you don’t, they’re not going to do it.

So be as socially engaging as you can. Don’t always talk on topic. Do not use one of these auto posters, if you haven’t figured that out already. If you have the service already, cancel it and get on top of just posting things yourself. Questions, call to action. Don’t always just post about inspirational quotes. I hate that. It’s not that I hate inspirational quotes. Quotes just don’t foster any sort of engagement or interaction with you and your fan. So if you’re going to do that, say, “Hey, what’s your favorite inspirational quote?” or “Who inspires you?” or something. Turn it into a question that requires some engagement on some level.

All right, gang. That’s it for this post and I hope you enjoyed it. Let me know if you have any questions. Talk to you later.